Not even a 3-tonne boulder could stop us!

Saturday’s Rally for the Mountain was split in two, when a boulder smashed into SH2, closing the Gorge and separating rally-goers.  About 150 people gathered at the Waikino Hall, and another 150 at the Karangahake Hall.

We were amazed to have so many people show up,  despite extreme circumstances, and SO many people getting turned away because of the rain and the Gorge closure.

We had people turning up from Whakatane, Gisborne, Tauranga, and all over the Coromandel to show support for our mountain.

We’ve had so much good feedback, with people feeling inspired and moved.

On the Paeroa side of the Gorge, more than 150 people gathered on a footbridge crossing the main highway, holding banners. The gathering included karakia from local iwi representatives and guest speakers Green MP Catherine Delahunty and Green candidate for the Coromandel Scott Summerfield.

MP Catherine Delahunty said she was impressed by the turnout.

“This group represents an even greater number all across New Zealand who want conservation land protected.”

“The fact that Karangahake, a sacred maunga lying deep in the heart of conservation land, is being opened up for mining is shocking and wrong.

“It’s wonderful to see how many people were willing to turn up in the pouring rain to support this event, and we know there are thousands standing behind them who want to see the integrity of conservation land restored.”

On the Waihi side of the Gorge, the second camp of rally-goers gathered in the Waikino Hall, and were treated to live music performance, food, coffee and speakers.

We rounded off the day with a concert The Refinery, showcasing live art performance, film and music.

Artist Dawn Tuffery made this beautiful image of our “rally of two halves but one message”, which perfectly sums up the day.  You can see more of Dawn’s work here. 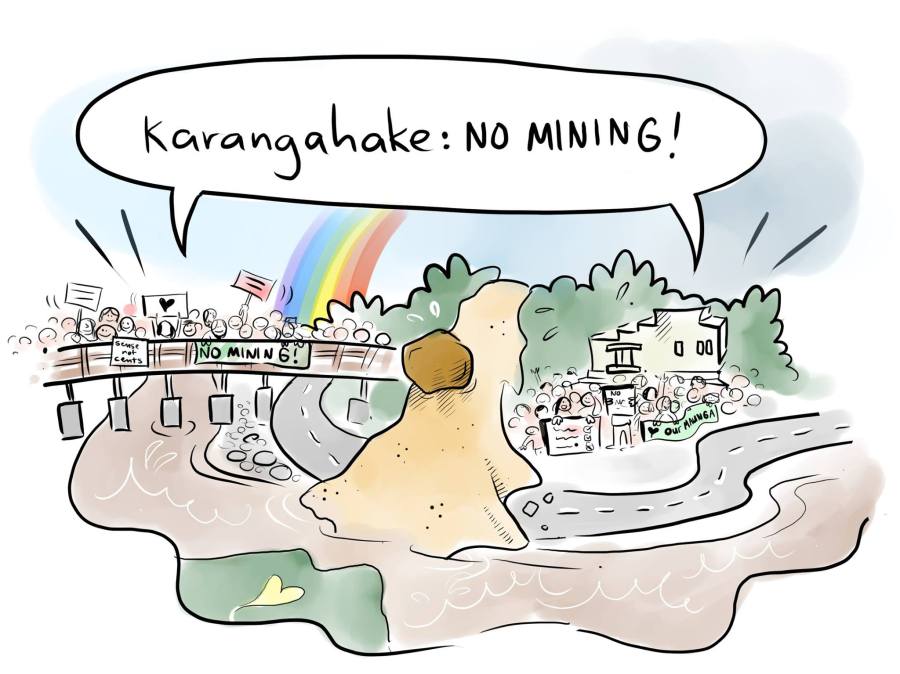 This site uses Akismet to reduce spam. Learn how your comment data is processed.

Will you help us protect Karangahake?